Arrival by Evening flight. Meet your guide on arrival and transfer to Negombo and check-in to the Goldi Sands Hotel for overnight stay.

After breakfast, proceed to Chilaw and visit Munishwaram Temple & Manavari Temple. Open lunch. After lunch, proceed to Sigiriya and check-in to the Fresco Water Villa for overnight stay.

Munishwaram Temple
It is believed that Munishwaram predates the Ramayana and a temple dedicated to Lord Shiva was located here. Munishwaram means the first temple for Shiva (Munnu + Easwaran).

Manavari Temple
Manavari is the first lingam installed and prayed by Rama and till date this lingam is called as Ramalinga Shivan. Rameshwaram is the only other lingam in world named after Lord Rama.

After breakfast. Proceed to Trincomalee and visit Koneshwaram Temple and Shankari Devi Temple in Trincomalee. Thereafter, check-in to the Sea Lotus Park Hotel. After lunch, visit the Hot Wells in Kanniya. Evening return to the hotel for overnight stay.

Shankari Temple
The famed SHANKARI Temple. In Sri Lanka, is one of the 18 Devi Temples (Ashta Dasha Shakti Peethas). Many have heard the Ashtadasha Shakti Peetha Shloka starting with LANKAAYAAM SHAANKARI DEVI. Composed by Sri Adi Shankara which means Shankari in Sri Lanka. This Shloka enumerates the list of places of Devi temples which are considered to be part of the 18 Devi Peethas.

Hot Wells Kanniya
The hot wells of Kanniyai or Kanniya are close to the main road to Anuradhapura. Only about 10 kms from Trincomalee town. Pilgrims believe in their healing power. There are many different versions of the myth on how these curative hot water wells came into existence. Most of them are connected to Ravana. One legend about Kanniya’s origin has it. This is the place where King Ravana carried out the last rites for his mother. When he was unable to find water to duly perform the rites. He in anger pierced his Trishula into the ground seven times. Water started gushing out immediately. The very hot water cooled down to the present degree when Ravana’s anger calmed down. The temperature of the water is different in all the seven wells.

After breakfast. Proceed to Kandy via Matale. Visit a spice garden and have a typical Sri Lankan rice and curry. Thereafter, proceed to Kandy and check-in to the Senani Hotel. Rest and relax. Afterwards an evening visit the Temple of the Tooth Relic of Lord Buddha. Thereafter, see a cultural show of Folk Lore and Kandyan Dances. Late evening return to the hotel for overnight stay.

After breakfast. Proceed to Nuwara Eliya. Enroute, visit a tea factory and have a cup of freshly brewed famous Ceylon Tea. Thereafter, visit Hanuman Temple. Arrive in Nuwara Eliya and check-in to the Oakray Summer Hill Breeze. This resembles an old English town. Complete with a lake, race track, well- kept lawns with hedges, an anglican Church and an 18 hole golf course. Overnight at Nuwara Eliya.

After breakfast, visit Sitha Amman Temple, Divurumpola and Hakgala Garden. Open Lunch. After lunch, continue sightseeing of Nuwara Eliya. Afterwards in the evening, return to the hotel for overnight stay.

Sita Amman Temple
The prominent temple architecture will not fail to attract your attention. Ancient statues of Rama and Sita can be seen on one side of the temple. Today, the temple is a modern building with its paintings, statues and pillars decorated with sculptures. All depicting the tale of Rama and Sita.

Hakgala Botanical Gardens
This is the exotic pleasure garden where King Ravana kept the depressed Sita. Insisting that she marries him. It was here where the heart-warming meeting took place between her and Hanuman. Who brought her Rama’s ring with the news that Rama was looking for her. He offered to carry her back but she refused saying it would be an insult to Rama’s honour if she did so. Part of this majestic garden still exists. It is also said that Hanuman nearly destroyed it in order to prove to Ravana of the forces against him.

Divurumpola Temple
This is the place where Seetha Devi underwent “Agni Pariksha”. It is a popular place of worship among locals in this area. Divurumpola means place of oath in Sinhala. The legal system permits and accepts the swearing done at this temple while settling disputes between parties.

After breakfast, proceed to Kataragama. En-route see the Rawana Ella waterfalls. Continue to Kataragama and check-in to the Mandara Rosen. After lunch, visit Kataragama Temple. Late evening, return to the hotel for overnight stay.

Ravana Ella Waterfalls
It is said that Ravana had kidnapped princess Sita. And had hidden her in the caves behind this waterfall, now simply known as the Ravana Ella Cave. At the time, the cave was surrounded with thick forests in the midst of wilderness. It is also believed that Rama’s queen bathed in a pool that accumulated the water falling from this waterfall. 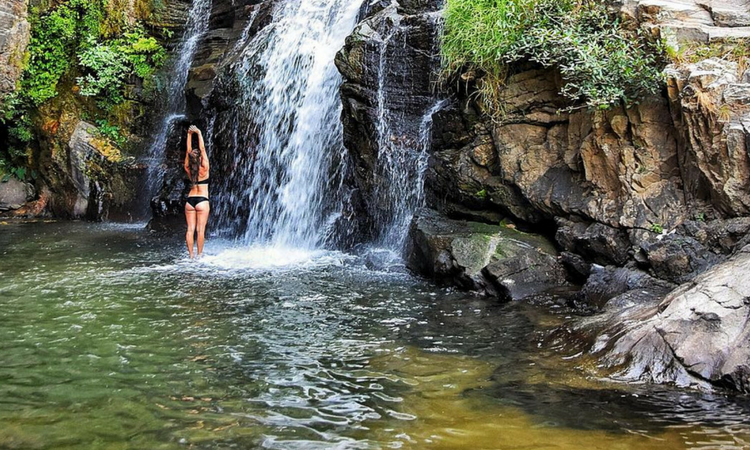 Ussangoda
After meeting Seetha Devi. Lord Hanuman decided to test the strength of the mighty King Ravana and his army of Rakshasas. In the event that unfolded Lord Hanuman’s tail was set on fire by the Rakshasas. Who in turn went on to torch some parts of King Ravana’s empire. Ussangoda is one of the torched areas, which is said to have been an airport used by King Ravana.

After breakfast visit the first Anjaneyar Temple in Colombo and Kelaniya Temple. Thereafter, proceed to Negombo and check-in to the Goldi Sands. Evening visit the Negombo Fishing Village. Evening, return to the hotel for overnight stay.

Kelaniya Temple
After King Ravana’s death. Vibeeshana was coroneted as King of Lanka by Lakshmana at Kelaniya. There are murals enshrined outside the Buddhist temple depicting the crowning of Vibeeshana. The Kelani River is mentioned in the Valmiki Ramayana and Vibeeshana palace was said to be on the banks of this river.

After breakfast, proceed to Airport for the departure flight.

PRICE DOES NOT INCLUDE

THE ABOVE OFFER VALID UNTIL 31ST OCTOBER 2020