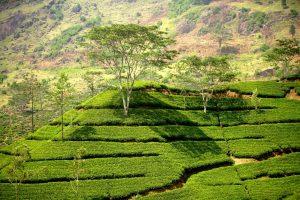 Hatton is a town in the Nuwara Eliya District of Central Province of Sri Lanka.

Nearly every hillside is bright with tea bushes trimmed so neatly that, from a distance, they look like they’re covered with a thick-pile rug. Providing cool relief from the heat of the lowlands. The early mornings are usually veiled in a mist that slowly disolves to reveal the mystical view of Adam’s Peak to the South-west.

You can reach Hatton rail. Trains chug slowly from Colombo via Kandy, on a route built for late 19th-century tea pioneers. The journey itself makes the trip worthwhile.

As the route leaves Kandy, it begins to climb into the hills, past a patch-work of small holdings and banana plantations. Rural life soon gives way to steep gorges, clumps of forest and waterfalls, spanned by arched bridges that wouldn’t look out of place in the Scottish Highlands.

Hatton  is close to the shores of Castlereigh Reservoir. This is an emerald body of water so picturesque that many travellers spend their time here simply admiring the views. 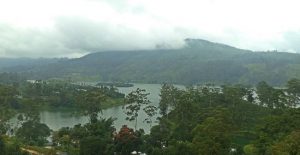 There are plenty of opportunities to learn about the surrounding tea plantations. Most factories offer tastings and tours to see the machinery in action. If you are lucky you might see the tea pickers at work or weighing their day’s haul at one of the many roadside weigh-stations. Study the delicate art of picking the tea buds.

The landscape is excellent for walks and bicycle rides, with routes winding past British-built stone churches and Hindu temples painted in colourful paintings. 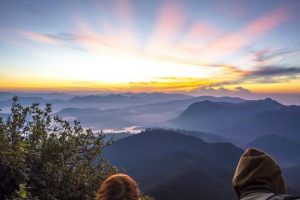 The summit of Adams Peak is not Sri Lanka’s highest as most people think. But with its distinctive prismic shape, it’s the most dramatic. At its pinnacle is a boulder with a foot-shaped depression. This footprint is revered as the appearance of Buddha, Shiva or Adam, by Buddhists, Hindus and Muslims respectively. Whatever you believe, the mountain has been a pilgrimage site for more than a thousand years.

Due to the site’s importance, it’s not a wilderness climb to the peak. Instead, you ascend a staircase of around 5,000 steps that has been built into the mountainside, with benches and refreshment stalls along the way. At the top (2,250 m, 7,326 ft), a temple surrounds the boulder, and worshippers leave fruit, flowers and religious figurines.

There are two ways to climb the peak. During pilgrimage season (January to April). The stairs are lit and you can go up at night, aiming to see sunrise at the summit. It can be incredibly busy during this period. Especially around a full moon or the Sri Lankan New Year in April. Although there’s a real camaraderie to climbing with hundreds of pilgrims. For a much quieter experience, you could scale the peak in the daytime. Although you’ll need to be prepared for hot and humid weather.

The best time to visit Hatton

Colonial tea planters nicknamed the region ‘little England’ for its cool weather and higher than average rainfall. You’ll need to be prepared for the odd shower year-round, but the best time to go to Hatton is from January to April, when it’s relatively dry and daytime temperatures hover around 28 C (82 F). It’s possible to visit at other times of year but, as weather patterns across Sri Lanka can be complex, we recommend discussing your plans with one of our Sri Lanka specialists, who can suggest the ideal time based on your interests.