Kandy is located in the Central Province, and has a population of 125,000 people it is the second largest city in Sri Lanka after Colombo.

Lying on the main tourist trail because of the impressive Temple of The Tooth relic, which became a UNESCO World Heritage site in 1988. You can hear the buddhists chant from as early as 5.30 in the morning.

The famous Perahera Festival is where elephants and dancers parade the streets for 10 days. This takes place in early August. 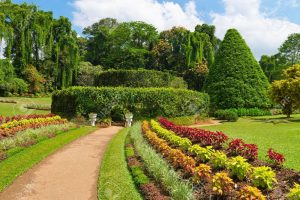 Predominant in the area is the Kandy Lake. The Temple of The Tooth lies to one side of the Lake, but the connecting road is closed. As a result of this, traffic is redirected around the lake. There is also a visible security force in the area, and police check points are not uncommon.

There is  plenty of accommodation choices in the surrounding Hills of Kandy, such as off Rajapihilla Road. As these are above the lake, some of them have outstanding views.  Expect prices to almost double during the Perahera season.

Getting to Kandy should not be a problem. Both bus and rail are possible options from Colombo. The Kandy to Nuwara Eliya rail journey is deemed one of the most beautiful in the world as the train clings to the mountain passes overlooking some of the amazing tea plantation scenery.