Polonnaruwa is situated 218 km from Colombo. 66 km from Sigiriya and 103 km from Anuradhapura. This was the medieval capital of Sri Lanka in the 11th and 12th centuries and successor to Anuradhapura.

Many interesting well preserved temples shrines and other buildings mostly of 12th century period are located here. Significant remnants that can be seen are the Kings Council Chamber with inscribed pillars. The thuparama is an oblong brick house with ornamental facades and beautifully executed animal statues.

The palace of King Parakrama Bahu is one of Polannaruwa’s greatest landmarks. In one corner of the palace grounds is the king´s swimming pool, with crocodile-mouth spouts used to lead fresh water into the pool. 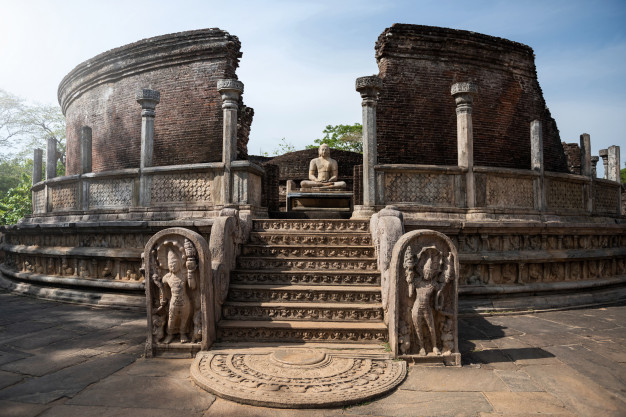 Don’t forget about the Sacred Quadrangle. This is a compact group of beautiful and impressive ruins within a raised up platform bounded by a wall. This is the most concentrated collection of buildings in the whole Ancient City, and a must-see for any visitor!

In conclusion. There is the Rankot Vihara, which is a huge dagaba of impressive 54 metres tall. It is the largest dagaba in Polonnaruwa, the fourth largest in Sri Lanka, and dates back to King Nissanka Malla (1187 – 1196).
In between the ruins and temples, you can find traces of the jungle trying to take over the ancient city.

Wandering around these impressive structures that are still in such good condition, it ‘s incredible to think about all the hard work done to restore them since the archaeologists first discovered the Ancient City all covered with trees.