The Pinnawala Elephant Orphanage is situated northwest of the town of Kegalle. Halfway between the capital Colombo and the ancient city of Kandy. It was established in 1975.

By the Sri Lanka Wildlife Department in a 25 acre coconut property adjoining the Maha Oya River.

The orphanage was originally founded in order to afford care and protection to the many orphaned Elephants found in the jungles of Sri Lanka. Prior to the invasion of the British in Sri Lanka in 1815. An estimated 30,000 elephants lived on the island. In the 1960s. 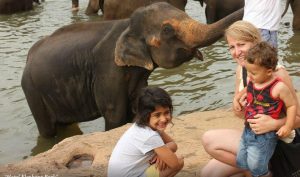 Following nearly a century of game hunting and slaughter by the British. In conclusion, this caused the virtual extinction of the elephant population.

The tragedy of decimation of the elephant population prompted the Government of Sri Lanka to initiate the Pinnawala Elephant Orphanage.

However, the good news is elephants are not extinct and the number of elephants living in Sri Lankan wilderness exceeds 3,000.

In 1978 the orphanage was taken over by the Sri Lanka National Zoological Gardens from the Department of Wildlife. A captive breeding program was launched in 1982.

Since the inception of the program over 30 elephants have been born here. The aim of the orphanage is to simulate a natural habitat to these elephants. 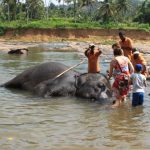 However, there are some exceptions.

The elephants are taken to the river twice a day for a bath. Also all the babies less than three years of age are still bottle fed by the mahouts and volunteers.

Each elephant has around 76 kg of green matter a day. Also around 2 kg from a food bag containing rice bran and maize. The orphanage which boasts to have the largest herd of captive elephants in the world. It’s very popular and visited daily by tourists. The main attraction is clearly to observe the elephants bathing which is quite a spectacle. 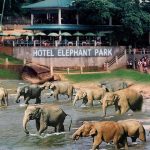 We can offer our guests an incredible hotel.  Overlooking this bathing area which has amazing views of the elephants.

Pinnawala Elephant Orphanage can be reached via the A1 Colombo – Kandy main road. Turn off at the 82 km post at Kegalle. The nearest railway station is at Rambukkana 2km away from the village of Pinnawala.

Times to visit the Orphanage. 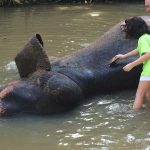 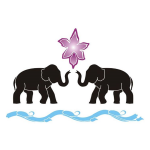 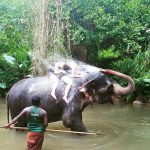 Alternatively, we highly recommend the Millennium Elephant Foundation. This is much smaller. Much more hands on and is limited to so many visitors per day. So here you won’t find masses and masses of tourists as you do at the orphanage down the road.

Now MEF is home to the new and exclusive Elephant Walk Experience. The alternative to elephant riding option for tourists. An ethical, up close and personal experience unique to MEF. The most interactive enjoyable way to see domestic elephants in Sri Lanka.